Driving to Umlazi, I pulled down my sun visor & opened my mirror to pop on my lipstick. I did a double take & focused on my pearl earrings. I said out load to myself, “Oh Daniyel, what were you thinking? Wearing pearls in Umlazi? Somehow it just didn’t seem appropriate. My mind started running away with me & I suddenly realized they were very appropriate which inspired me on so many levels. (Continue reading to find out why)… This little boy had 3 tokens and only wanted to spend one on shoes. He was over the moon about his new shoes…he didn’t need another thing! Totally satisfied & ecstatic! It was enough.

Today was the day we were rolling out a vision, Project 1 at the Mason Lincoln Special School for the physically challenged learners. We received so many donated clothes from the Style Me “Spring Clean your Life” high tea fundraiser for COPT that we decided to do two projects.

Project 1: A COPT Shop where the physically challenged children could “buy” 3 items of clothing with coupons. It was such a treat for them as many of them only own one jersey.

So you ask, why Pearls Daniyel?

These children have been through so much…maybe the irritation of not being understood, maybe its the irritation of a learning disability or legs that just dont work. Yet, after spending a day with them you can see they have hearts of gold, or could it be “pearl”? Precious hearts that you and I with all the money in the world would not come close to. Like the young man who chose clothing for his grandmother instead of himself. (Selfless). Like the little boy who could take 3 items but only chose one. Like the mentally challenged little girl looking after her friend in a wheel chair and helping her get items for her friend rather than herself. These are all characteristics of a “great price”… a pearl of great price. There is so much we can learn from these children.

This school is a pearl, a gem, in a township where you would think nothing special could be found. Could we also be seen as bringing pearls of “great price” in the form of clothing to these children? It was as if they had found a gem or a pearl when they had found an item which they loved.

“In order to protect itself from irritation, the oyster will quickly begin covering the uninvited visitor with layers of nacre – the mineral substance that fashions the mollusk a shells.Layer upon layer of nacre, also known as mother-of pearl, coat the grain of sand until the iridescent gem is formed.”  – Live Science Thembeka helping with sorting clothing. She was a fabulous translater when none of us had a clue what was being said by some of the kids. The COPT Team! Together everyone achieves more! This boy only wanted trousers, he insisted on the other children throwing them on top of him. Possession is 9/10ths right? 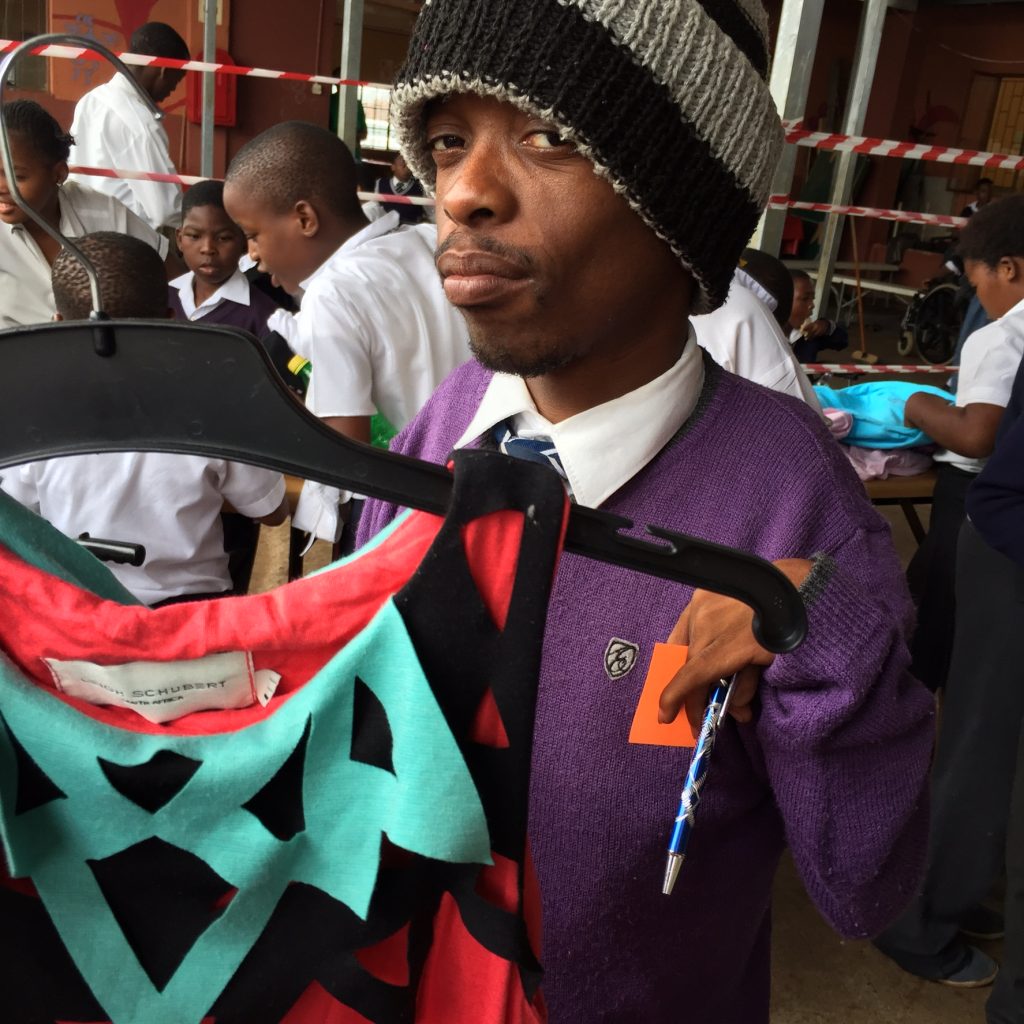 This was a special moment…he decided to spend his 3 tokens on items for his grandmother (obviously such an important person in his life). I helped him shop to try and find the right size for her. So special! This lady did a little fashion show for me. My Australian friend, Crissie Wright, with her little boy, Moses. There was no stopping Crissie from getting involved again during a two week vacation. Crissie lived in South Africa for two years doing missionary work with her husband a four boys. Wow!!! How does any woman do it Style Me shoes after a morning in Umlazi…Priceless! And yes, I was still wearing my pearls!

“Daniyel is the fashion guru to go to. She is professional, knowledgeable and friendly. Spend a day with her and you'll be equipped with a lifetime of style know-how.” - Sonya Szabo

“Daniyel found creative ways to draw out the style that was hidden within me. While sharing her expertise and incredible resourcefulness, she taught me skills to use as I go on to develop a more confident me. She is a sleek power tool in the world of fashion and beauty, building up a stunning design with top quality materials, whilst meticulously sticking to budget and fulfilling a new vision of the best we can be!” - Kimberley Beeler

“The most talented lady in South Africa. She comes highly recommended. Such class and style.” - Abi DeVries

“What a wonderful time I had yesterday with Style Me and Daniyel. A wonderful prize and so recommend for all women out there!!! Now I need to win the Lottery to put all these awesome clothing ideas into practice!!!” - Caryn Gannon

https://www.youtube.com/watch?v=cwzOUsIS7y4
We use cookies to ensure that we give you the best experience on our website. If you continue to use this site we will assume that you are happy with it.OkNo